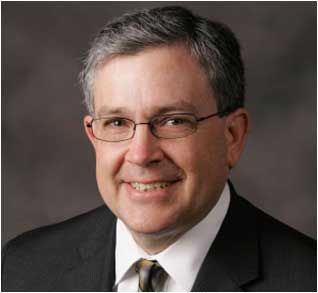 Doug Chaffin announced at Friday’s Monroe County Link Action Team Meeting about his retirement from First Merchants Bank. Doug has been on BDC’s Board since May of 2003 and we are excited for him to begin this new chapter of his life.

Below is the Monroe News article that was posted on November 8.

H. Douglas Chaffin, current First Merchants regional president and former president of MBT, will retire from his position at the newly joined financial institution. He has been with the bank since 2001.

A longtime Monroe banker instrumental to the merger of Monroe Bank & Trust and First Merchants Bank will leave his post soon.

H. Douglas Chaffin, current First Merchants regional president and former president of MBT, will retire from his position at the newly joined financial institution. He has been with the bank since 2001.

The announcement comes a day after Chaffin was appointed to the First Merchants Corp. Board of Directors, a post he will retain in his retirement.

“The merger with First Merchants is an ideal match of corporate cultures, values and commitment to exception customer service,” Chaffin said. “First Merchants’ current trajectory of performance and growth presents enormous potential and I look forward to contributing to continued momentum and success.”

Thomas Myers, executive vice president and chief lending manager for the region, will assume Chaffin’s role. He joined MBT in 2002.

Chaffin will be at the Monroe bank through January, working alongside Myers during the transition. He and his family will continue to live in Monroe.

In his role with the board, Chaffin will fulfill the obligations required by regulatory agencies. He said the board works to fulfill the needs of the company’s shareholders.

“It’s an honor to be appointed to the board,” he said. “First Merchants is an outstanding company with an impeccable reputation for serving its communities.”

The company’s profile is what made the prospect of the merger so compelling, he added.

First Merchants and MBT finalized the deal Sept. 1 and had been in the works since October 2018 when MBT officials announced their intention to merge with the Indiana-based company.

MBT’s assets included 20 banking centers located throughout southeastern Michigan and its network of ATMs. All locations and services will remain open under First Merchants’ ownership.

MBT had served Monroe County for more than 100 years. In 1968, when it was Monroe State Savings Bank, it was renamed Monroe Bank & Trust.

With the addition of MBT’s holdings, First Merchants has more than $12 billion in assets.

From the early days of the merger, Michael Rechin, First Merchants president and CEO, said Chaffin had been looking forward to “an awesome retirement.” But when it came time to fill a vacancy on the board, he immediately came to mind.

When looking for members of its board, First Merchants Bank looks to include members of the communities in which it operates, according to Rechin.

Myers said he and the bank will continue to deliver high-caliber work and dedication to the community.

“I will work hard to retain the positive characteristics MBT had, such as involvement in the community,” he said.

The merger enables the regional bank to provide more products and services to its customer, he said, adding that the local leaders continue to be impressed with First Merchants.

“I’m looking forward to helping our employees grow and meeting the needs of our customers.” Myers said.

Rechin said Myers’ appointment was logical. In addition to his career at the bank, he also was a key player in the banks’ merger. The selection process was straight-forward, he said.

″(Myers) has a terrifically deep understanding of the needs of the local market,” he said.

Rechin said he and Chaffin share an understanding of the role banking has in a community and its customers. He has known Chaffin and his family for several years and commends him for his dedication and passion for the industry.

“When you look at what (Chaffin) has done in his career, it’s pretty amazing,” Rechin said.

Chaffin has been working in the banking industry for more than 40 years. He joined MBT in 2001 and was appointed to its top post in 2004. Prior to his time at MBT, he had executive roles at Huntington National Bank and First Michigan Bank.

He is the chairman of the Monroe County Business Development Corp. and the River Raisin National Battlefield Park Foundation. He is a member of the Foundation at Monroe County Community College’s board.

Chaffin has weathered several changes in the banking industry and economy. He considers his time in Monroe the most fulfilling experience of his career.

“Our staff is an outstanding, dedicated team,” he said. “It’s been an honor to be a part of them. … The staff has met every single challenge every step of the way.”

First Merchants is moving MBT accounts to its system. Over the weekend it will complete transitioning local bank branches, ATMs and other public-facing assets to First Merchants’ branding.Rechin, who is in Monroe for the process, said hundreds of First Merchants employees are helping Monroe-based bankers with the final stages of the transition.

“Its been a long time coming,” Rechin said. “It’s a big weekend for us.”

As for the future, Rechin said First Merchants is confident in the local team and is relying on their leadership.

“We’re not sending people up (to Michigan),” Rechin said. “The talented people leading this bank locally will still be leading it.”

Posted in Uncategorized
← City of Monroe Recognized as 4-Star CommunityA BIG thanks to the Monroe County Link Volunteers! →