As FCA has told us over the last several months, they would be moving the Jeep Cherokee in 2017 so this layoff is not a surprise. Let’s hope the lay offs  are short lived. We are hopeful that has the transition takes place that our existing supplier base in Monroe County will pick up new programs to support the Jeep Wrangler including the new pick-up as they ramp up for production.  This may open more opportunities for  new suppliers to locate in Monroe County. 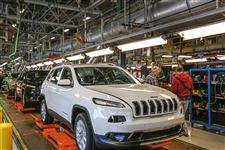 Fiat Chrysler Automobiles has notified state officials that it will temporarily lay off 3,200 workers at its Toledo Assembly Complex in April

Reprinted from The Blade
Published February 15, 2017
by Tyrel Linkhorn

As it begins preparations for the next-generation of the Jeep Wrangler at its Toledo Assembly Complex, Fiat Chrysler Automobiles has notified state officials that it will temporarily lay off 3,200 workers in Toledo in April.

The layoffs have been expected, though the date Fiat Chrysler provided effectively confirms that April 7 will be the last day of Jeep Cherokee production in Toledo. The company is moving assembly of that vehicle to its plant in Belvidere, Ill., to free up space for the new Wrangler, which is expected to premier this year.

Union officials have previously told The Blade that the layoffs are expected to last about six months. Fiat Chrysler has declined to say publicly when production of the new Wrangler is expected to begin.

Between state unemployment insurance and a supplemental unemployment benefits paid by Fiat Chrysler, workers will on average receive 95 percent of their weekly take-home pay while they are laid off.

A spokesman for the company confirmed the temporary layoffs to The Blade on Tuesday.

The company previously has said that those workers will all return, plus it said in July that it would add 700 more full-time jobs at the plant. Details on those jobs have not been released.

Fiat Chrysler has committed to investing $700 million in Toledo as it works to ready the plant for the new Wrangler. The Wrangler now is made at one factory at Toledo Assembly Complex and the redesigned Wrangler will be made at the next door factory vacated by the Cherokee once the plant is retooled.

The moves detailed this week will not affect production of the current version of the Wrangler, which is expected to continue through the launch of the next-generation Wrangler. Eventually that line will be converted to build a new Jeep pickup.

Early this year, Fiat Chrysler said that work would receive a share of $1 billion worth of capital investment that would be split between the Toledo plant and the automaker’s Warren Truck Assembly Plant in Michigan. That facility will build a Jeep Grand Wagoneer.

Including part-time workers, the Toledo Assembly Complex plant has about 5,000 workers, 4,760 of whom are hourly.